The five nations that ratified during the ceremony are:

These states are also joined by Ecuador, which became the 27th state to ratify the Treaty on September 25th, one day before the ceremony.

The following states signed on to the Treaty:  Botswana, Dominica, Grenada, Lesotho, St Kitts and Nevis, Tanzania and Zambia, as well as the Maldives and Trinidad and Tobago (as the latter two states both signed and ratified the Treaty during the ceremony).

The treaty now has 79 signatories and 32 States Parties. By signing, a State commits to not take any action that would undermine the treaty’s object and purpose. Upon depositing its instrument of ratification, acceptance, approval or accession, a state becomes legally bound by the terms of the treaty. When the Treaty has 50 states Parties it will enter into force, making nuclear weapons illegal under international law.

The ceremony was hosted by long-time champions of the Treaty: Austria, Brazil, Costa Rica, Indonesia, Ireland, Mexico, New Zealand, Nigeria, South Africa and Thailand and enabled presidents and foreign ministers to take this important step while they were gathered at the UNGA.

Scroll through the photos: 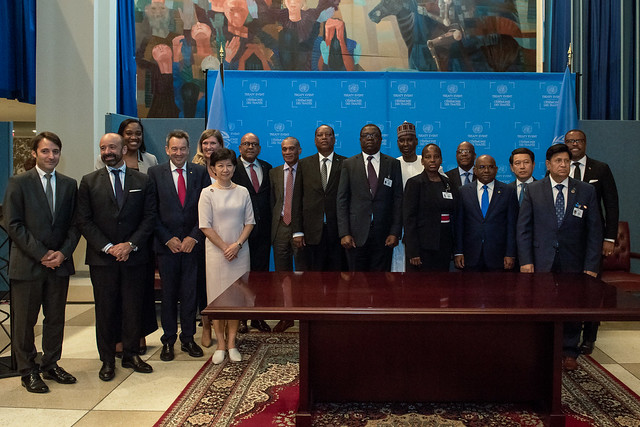 Newly-elected President of the UN General Assembly, Mr Tijjani Muhammad-Bande of Nigeria, opened the ceremony, and spoke passionately in support of the Treaty’s importance in ending nuclear weapons. “We commend states that have joined TPNW and urge those who have not done so to do join in this most vital action,“ he said during his address to the UNGA Plenary event earlier in the day.

Beatrice Fihn, Executive Director of ICAN, celebrated the move by these 12 countries and the outspoken support for the Treaty around the world throughout the day.  “Away from most cameras, we come together to do the actual work of nuclear disarmament. For the good of your people and the good of the world you propel the Treaty toward entry-into-force […]  Today, in this room, I feel the scale tilting toward the Elimination of Nuclear Weapons. This day of action gives us all hope at a bleak time.”

After today, the treaty is almost two-thirds of the way to its entry into force, and this momentum is expected to continue. Several countries have confirmed to ICAN that their ratifications are imminent, and campaigners around the world will not stop until every country is on board.

The full ceremony can be viewed here: